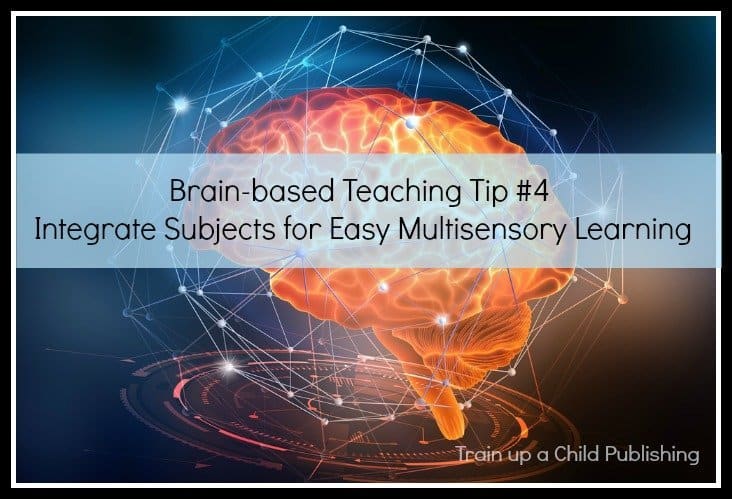 So, integrating subjects, rather than artificially separating each subject, aligns better with the way our kids’ brains naturally learn. Consequently, children learn better when we integrate subjects naturally along with using different senses as a part of the learning.

And especially when we add a strong emotion to the learning.  Think of studying history.  You can read a textbook summary of a historical incident… or read an exciting story about the same incident. Which one do you think you and your kids will remember?

Integrating subjects is a popular direction now in public and private schools. But in these settings, it’s a laborious project because there are so many teachers that have to get together on what will be taught in all the different subjects.

Fortunately, with homeschooling, you can integrate subjects easily. Since you’re teaching all the subjects, you do is put them together, or better yet, choose a curriculum that does it for you.

Integrating subjects and adding different senses to your teaching/learning is the way to get the most out of how your students’ brains are wired.

So how do you do it?  Instead of learning history, science, language arts, and fine arts separately, you put them together in ways where they naturally occur together. And it not only makes learning easier, but it also makes learning more natural. More engaging. Also, it takes less time.

And you know me, I’m all about bringing your kids’ homeschool education to life while still balancing your other responsibilities. So if there’s a way that you can teach more effectively and save time, I’m all about it! And I’m sure you are, too!

Okay, back to my example of how to integrate subjects:

For example, while you are studying the Ancients period, you could weave the following things into your study:

Adding in the different senses

When you’re studying science, look for books about the struggles and persistence of those who invented life-changing medicine or technology.

Give your children a vision of the world-changers throughout time. In addition to reading, incorporate other senses into your homeschooling:

By integrating subjects naturally, adding multisensory learning, AND strong emotions… and you’ve got a winning combination! 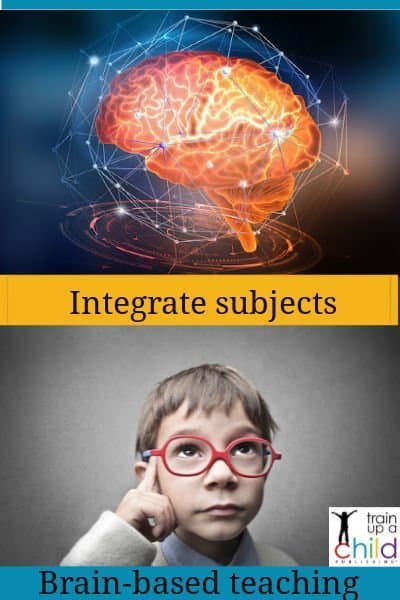 Here’s how we spend one day:

We were continuing our study of Ancient Rome.  I made some brief introductory comments and asked our kids a few questions.

We talked about how the Ancient Roman Republic eventually grew into the Roman Empire, while we looked at a cookie dough map made by my middle schooler showing how much land that the Empire had conquered as of about 30 A.D.

Editor’s Note: This post includes affiliate links. Should you buy something using one of our links, we might make a few cents commission on your purchase, at no extra cost to you. We use this for coffee.

So comparing the time frame with the United States really brought the longevity of the Roman Empire home to my children. This is also called “priming” in brain-based teaching language–connecting something they already know with something they are learning.

Then we talked about Bible history.  New Testament history, particularly, and how Jesus was born during the Roman occupation of Hebrew lands.

While we talked, we snacked on bread with olive oil or honey, cheese, olives, figs, and grapes (common Greek foods). We ate from an intricately designed, colorful plate with a Greek motif that was a gift from my parents who had once traveled there. (Do you see the sensory things in there? Touching and tasting Greek food from a colorful plate…?)

After our conversation and snacks, we moved to the sofa and got comfortable before continuing our read-aloud: The Bronze Bow, by Elizabeth George Speare. This is the exciting story of an angry young teen whose only goal in life is to avenge his father’s death and rid Israel of the hated Romans.

Spoiler warning: I don’t want to give it away if you haven’t read it, but Daniel’s hard heart is eventually affected by the teachings of Jesus…  Definitely use this book as a read-aloud during your Ancients unit!

Back to our day.

While we were reading, I reminded the kids to be thinking about choosing a scene out of the book to dramatize by the time we were finished with the book..

Further subject integration during our study

At another time during our study of this historical period, we looked at Roman statuary and architecture and sketched the three different types of Greek columns. Then we compared them with the two the Romans added. Our kids also made “mosaics” using small pieces of colored paper cut into squares.

Additionally during this unit, one of my children built a volcano and we talked about Mt. Vesuvius. This is the volcano near modern-day Naples that erupted in 79 AD, burying the city of Pompeii.  And which is still considered one of the most dangerous volcanoes in the world, by the way.

Continuing with our study…  Our kids learned grammar and writing skills from the copy work I chose from our literature and science books. They narrated from their independent reading, and my older student also completed written narrations.

So in this example, what subjects did we integrate?

And which senses did we use?

So is the idea of emotion aiding in learning a new one for you?  The sense “Feeling” at the end of the bulleted list above is one I bet you aren’t accustomed to seeing.

But what our kids feel…the emotions they experience before and during learning… play a critical role in how effective that learning is.

It’s logical that when children are anxious, overly stressed, depressed, angry, or fearful, there’s not going to be much learning taking place.

But when children are relaxed, intrigued by the subject matter and/or teaching method, and looking forward to what they are going to be doing, the opposite is true.

Recent brain research says that emotions can play an even more fascinating part in learning.

Emotion can play a larger role in learning than just preparing students to be ready or not to learn. According to a recent study cited in the Frontiers in Psychology journal article, “The Influences of Emotion on Learning,”

Emotion has a substantial influence on the cognitive processes in humans, including perception, attention, learning, memory, reasoning, and problem-solving.  Emotion has a particularly strong influence on attention…as well as motivating action and behavior.

So how do you add strong emotion to a learning experience?

Easily!  By reading or hearing an exciting story with heroic characters, suspense, excitement, joy, and sadness…  by using a literature-based curriculum and choosing excellent children’s literature, your children will be riveted. Through a story, they’ll be immersed in a culture and time period in a way that a textbook can never match.

Using narration and discussion of the story helps to reinforce the learning. Ask questions like this:

You can do this orally or you can have your students create reading response journals.

Focusing on the emotional parts of the story by asking these kinds of questions helps your student put himself in the place of the main character, struggling to solve the situation he’s in.

The most important strong emotion!

Do you remember the first post in this series?  In it, we talked about how critical it was to a student’s success that he believed in his ability to be successful. This is another example of how a strong emotion powerfully affects learning.

Make your homeschooling more effective by taking advantage of all that brain research has to teach us!

In conclusion, remember that we get the most out of our time, energy, and resources when we integrate subjects, use as many senses as possible in our teaching and activities, and use strong emotions where they naturally occur — in our reading.

Try it! You’ll be amazed at the results!